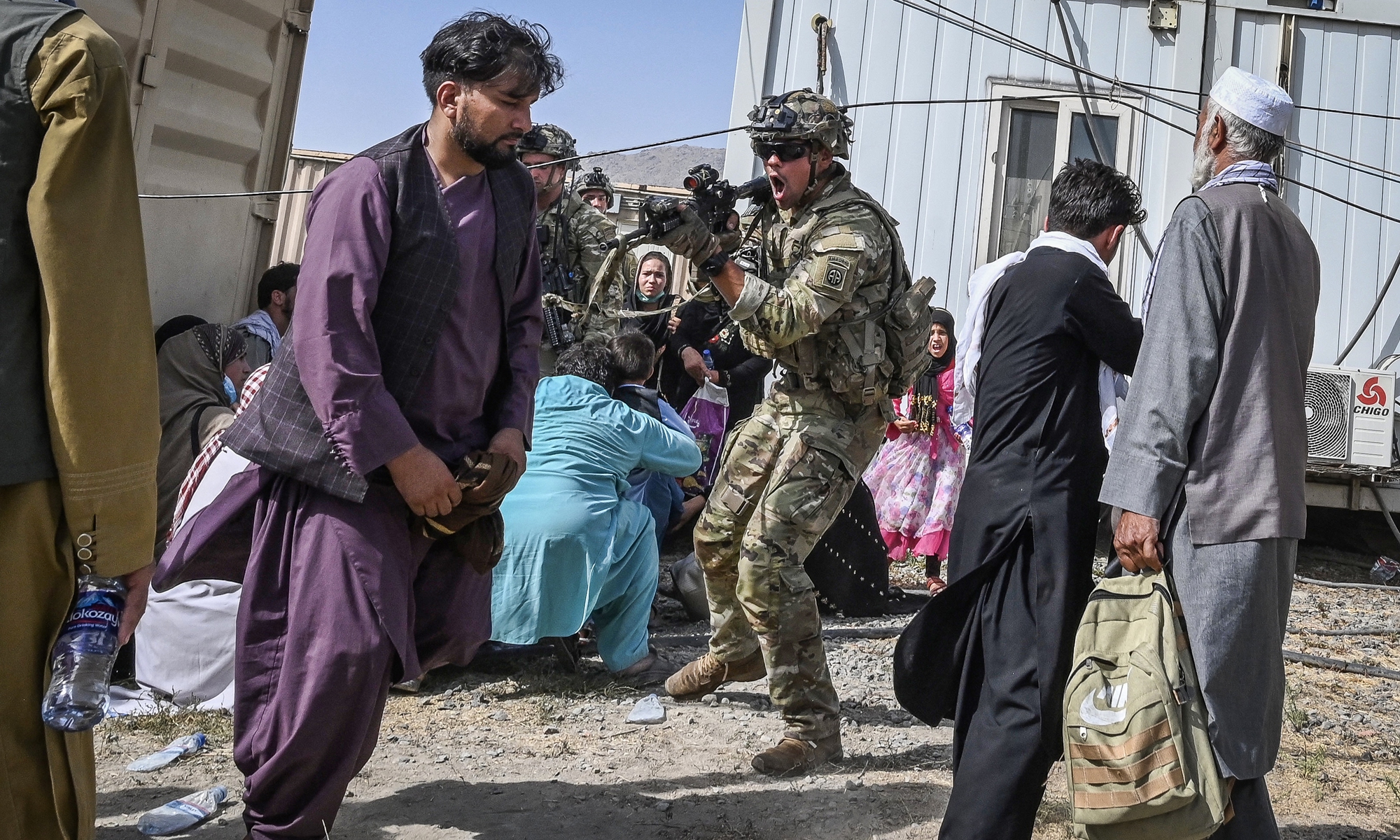 A US soldier (center) points his gun at an Afghan passenger at Kabul airport on Monday as thousands of people mobbed the city's airport trying to flee the country. Photo: AFP

The Afghan Taliban have successfully returned to Kabul and are ready to set up a new government while the hasty US retreat, which had caused deaths to locals, makes the end of the 20-year-long war look increasingly embarrassing to the US.

The UN Security Council held an emergency meeting to discuss the situation in Afghanistan on Monday.
Before the Security Council meeting, key US allies including the UK and France who fought the war with the US in the past two decades had expressed their disappointment and concerns, but China and Russia remain calm and cautious in observing the situation.
Chinese analysts said to what extent the Taliban could win worldwide recognition depends on how it could implement its commitments, and the failure in Afghanistan could deeply damage the US image as a hegemon. But the pullout from Afghanistan would make the US bolster its presence in other regions.
Washington is still able to export chaos to other countries and regions with the excuse of "values, international orders or human rights" and people worldwide should learn from the current situation in Afghanistan, experts noted.
China to be cautious
"China has noticed that the Afghan Taliban said yesterday the war was over, and they vowed to establish through negotiations an open and inclusive Islamic government, and to take responsible actions to ensure the safety of Afghan people and foreign diplomatic personnel," Chinese Ministry of Foreign Affairs spokesperson Hua Chunying said at a Monday news conference.
Jin Canrong, associate dean of the School of International Studies at the Renmin University of China, told the Global Times on Monday that "China needs to stay calm to observe the current situation, because the Taliban have gained an unexpected victory. This does not mean the Taliban have had overwhelming military power to ensure control, but the [Afghan] government's force has lost morale and given up."
The Taliban need to take political responsibility, but considering there are different forces within the Taliban, how to prevent the struggle for power and keep an internal balance, as well as satisfy local tribal forces would be the new challenges for the Taliban, and the risk of chaos still exists, Jin said.
Pan Guang, a senior expert on counter-terrorism and Afghan studies at the Shanghai Academy of Social Sciences, said that the possibility of a humanitarian crisis is there and if the Taliban failed to restore peace and order, the UN Security Council would have to consider sending UN peacekeeping troops into the region, not just to prevent the country becoming a breeding ground for terrorism, but also to conduct anti-drug missions and other humanitarian work.
"But this needs all five permanent members of the Security Council to be united," Pan noted.
Zhu Yongbiao, director of the Center for Afghanistan Studies in Lanzhou University, said the Afghan Taliban's success in Afghanistan is difficult to duplicate elsewhere, but some terrorist and extremist militia forces in the region, such as the Taliban Movement in Pakistan, as well as the Islamic Movement of Uzbekistan, and even ISIS in the Middle East, might believe that they would have the similar chance too.
"China and Russia, as well as other partners in the region and under the Shanghai Cooperation Organization, are paying attention to the situation to prevent the potential spillover and to strengthen border controls," he noted.

Russia was in contact with Taliban officials through its embassy in Kabul, Presiden Vladimir Putin's special representative on Afghanistan said on Monday, a day after the Afghan government collapsed and the capital fell to the Taliban, Reuters reported.

Russian Foreign Ministry spokeswoman Maria Zakharova also pointed out that there has been no reaction from Washington to human rights violations in Kabul and the appeals of Afghan citizens for evacuation help at Kabul airport, TASS reported on Monday.
The West shows a totally different image compared to those of China and Russia. "World leaders blame Biden, and express disappointment with Afghanistan." This is the headline of a report from Fox News on Monday, as it has listed the negative comments on the US failure from the leaders of some Western major countries, including UK Prime Minister Boris Johnson.
Johnson told Sky News that it was "fair to say the US decision to pull out has accelerated things, but this has in many ways been a chronicle of an event foretold." He urged Western leaders to work together to prevent Afghanistan from again becoming a "breeding ground for terrorism." French President Emmanuel Macron was scheduled to speak on Monday about the situation, while France also sent military aircraft to evacuate its nationals from the country.
The different attitudes between the West and non-Western major powers prove that those who closely followed the US in the Afghan war have felt the pain and shared the US feeling of failure. But China and Russia, which didn't follow the military actions, could be more flexible to deal with the dramatic change, Zhu said.
The Xinhua News Agency published on Monday a commentary entitled, "The 'fall of Kabul' rings the funeral bell of US hegemony."
The article said the US can simply leave but it has left Afghan people with endless pain. In the past 20 years, more than 30,000 civilians had been killed directly or indirectly by US forces, and more than 60,000 had been injured, with 11 million refugees. This proves that the US is the biggest exporter of chaos in the world, and its hegemony has caused too many tragedies.
Chinese experts said the end of the war in Afghanistan has deeply damaged the image of the US as a hegemon, and in the future, if the US decides to launch military actions elsewhere with the excuse of "democracy, values, human rights or rules-based order," very few countries would keep following it, or they would just send very few troops to reluctantly fulfill the relevant alliance treaty.
"But when the US withdrew from Vietnam in 1970s, it pulled itself out of a mess, which gave it more resources to do more in other regions. So the US global influence remains powerful," Xiao He, an expert from the Institute of World Economics and Politics under the Chinese Academy of Social Sciences, told the Global Times on Monday.
Experts warned that Washington is still able to export chaos by force, and the world still needs to stay alert, and learn from the current situation in Afghanistan.
Category： Global Governance 2021 Media
Related
Focus
Most Read
Spotlight
Notice
Events
Past