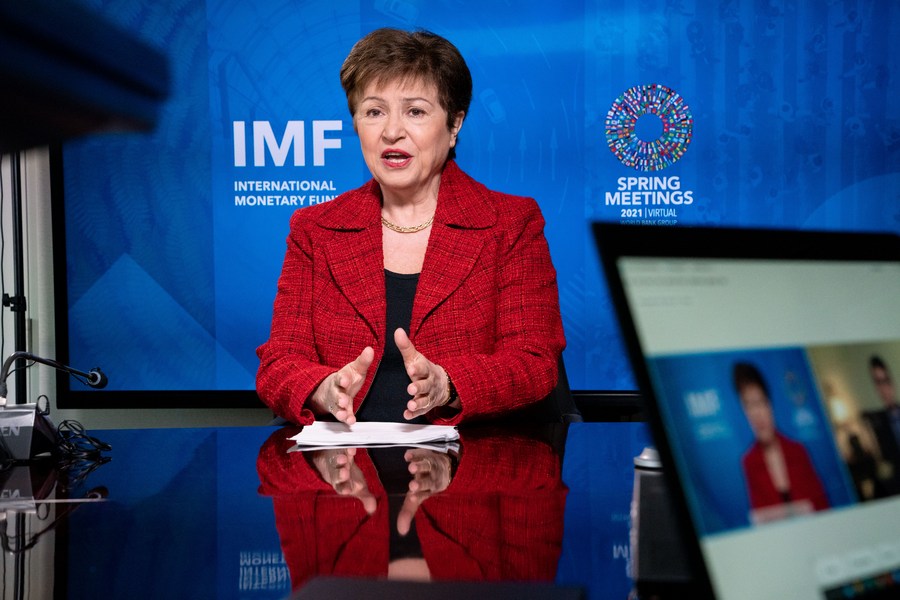 Kristalina Georgieva, managing director of the International Monetary Fund, receives an interview with Xinhua during the IMF Spring Meetings in Washington DC, on April 13, 2021. [Photo/Xinhua]

WASHINGTON -- The board of governors of the International Monetary Fund (IMF) has approved a new general allocation of Special Drawing Rights (SDR) equivalent to $650 billion, the largest allocation in the IMF's history, in an effort to boost global liquidity amid the COVID-19 pandemic, according to an IMF statement released Monday.

"This is a historic decision - the largest SDR allocation in the history of the IMF and a shot in the arm for the global economy at a time of unprecedented crisis," IMF Managing Director Kristalina Georgieva said.

Noting that the SDR allocation will benefit all IMF members, address the long-term global need for reserves, build confidence, and foster the resilience and stability of the global economy, Georgieva said it will particularly help the most vulnerable countries struggling to cope with the impact of the COVID-19 crisis.

The approval came just weeks after the IMF executive board approved the proposal. Final approval of the SDR allocation by the Board of Governors requires an 85-percent majority of the total voting power of all IMF members.

The SDR can be exchanged among governments for freely usable currencies in times of need. The Chinese currency, renminbi, formally became the fifth currency in the SDR basket on Oct 1, 2016, joining the US dollar, the euro, the Japanese yen, and the British pound.

The general allocation of SDRs will become effective on Aug 23, according to the statement.

Georgieva said the IMF will also continue to engage actively with its membership to identify "viable" options for voluntary channeling of SDRs from wealthier to poorer and more vulnerable member countries to support their pandemic recovery and achieve resilient and sustainable growth.

One key option is for members that have strong external positions to voluntarily channel part of their SDRs to scale up lending for low-income countries through the IMF's Poverty Reduction and Growth Trust (PRGT), the statement noted, adding that concessional support through the PRGT is currently interest free.