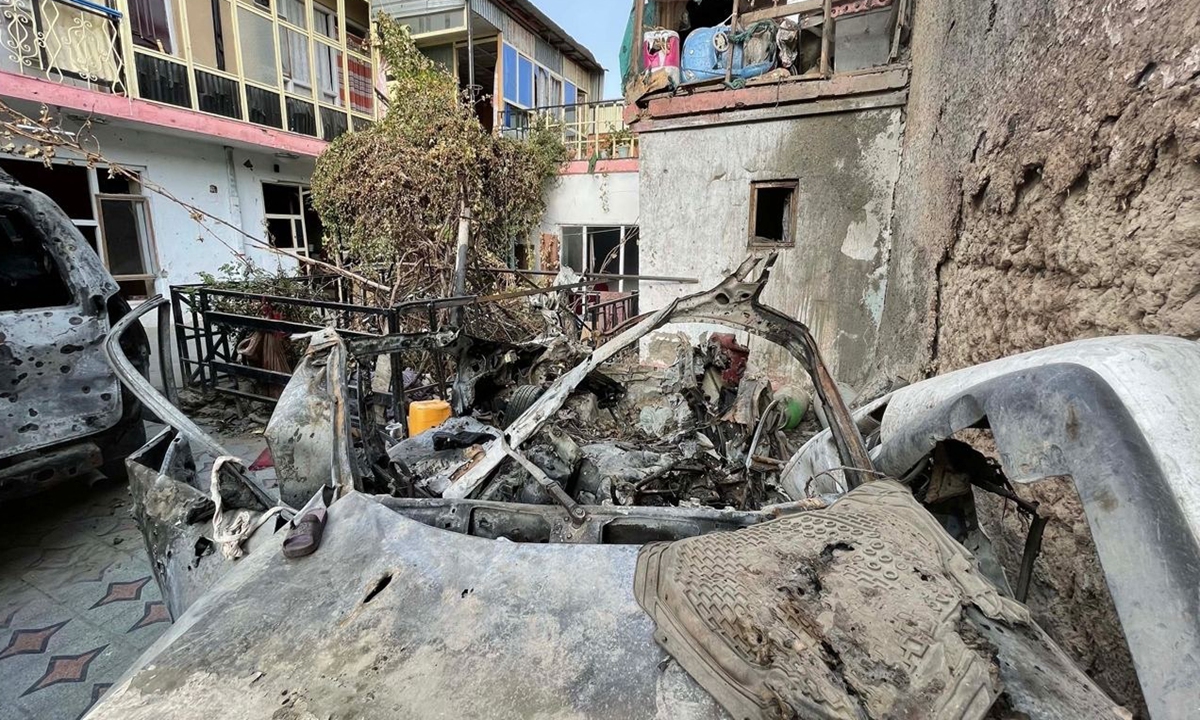 A view of the damage at Zemari Ahmadi family house after a drone strike one day before the final US evacuation flights from Kabul on September 11, 2021 in Kabul, Afghanistan. Photo: AFP

On August 29, two days after the Kabul airport which the US military used to organize evacuations was hit by suicide attacks, the US conducted a drone strike in Kabul. It claimed two terrorists were killed. However, US media reported in recent days that those killed in the airstrike were not terrorists, but 10 innocent civilians. It was an intelligence mistake.
Investigations by the US media found no evidence of what the US military claimed a large secondary car blast that occurred after the drone strike, and there were no explosives in the car. The car owner was just loading canisters of water into his trunk to bring home to his family since water deliveries had stopped in his neighborhood after the Taliban seized power. His vehicle was mistakenly believed as being filled with explosives.
The US has claimed that it tracked the target for a long time and the Pentagon has said it "disrupted a new attack planned by the Islamic State extremist group." This is a pure lie. It was completely a killing of innocent people. The intelligence basis was neither much nor solid. The US military's strike was to respond to the angry US public opinion due to the deaths of 13 US troops caused by the disorderly retreats and new terrorist attacks. The US military used civilians as scapegoats for terrorists to show its ability to retaliate, and to save face for the Biden administration, which has been in extreme trouble.
Washington instantly claimed it was a "righteous strike," but the facts proved that the purpose of this strike was dirty and the results were even more outrageous. Conducting airstrike in civilian areas has already violated the Doha agreement which clearly stipulates that air strikes can only be carried out in war zones, and this is already suspected of committing a war crime. Now that the truth has come out, we strongly call on the International Criminal Court to investigate this crime, give an explanation to the 10 victims, including 7 children, and their families, and return justice back to the world.
What is infuriating is that the US government and military have not apologized for this killing. The US military has stated that it would investigate, but nothing happened after that. Right after the drone attack, local people cried out a grievance. They said the ones who were killed in the explosion were not terrorists but from an ordinary family. The following reports of the US and Western media also questioned the results claimed by the US military. The US military claimed it struck the terrorists and made up many details to cover up the truth.
The incident once again smashed the myth that the US military and the US intelligence agency are omnipotent. It made people further see the extreme chaos caused by the US withdrawal from Afghanistan. It exposed the cruelty of the US military and the US intelligence agency who aimlessly found scapegoats and slaughtered innocent people at will in order to appease the public and maintain the image of the US military and the government. Is there any truth from the US military and the government? People across the world have the right to raise this question.
This issue should not be left unsettled. The Hague should act. The UN should give an explanation. International opinion should call for justice.
Category： International Security 2021 Media
Related
Focus
Most Read
Spotlight
Notice
Events
Past