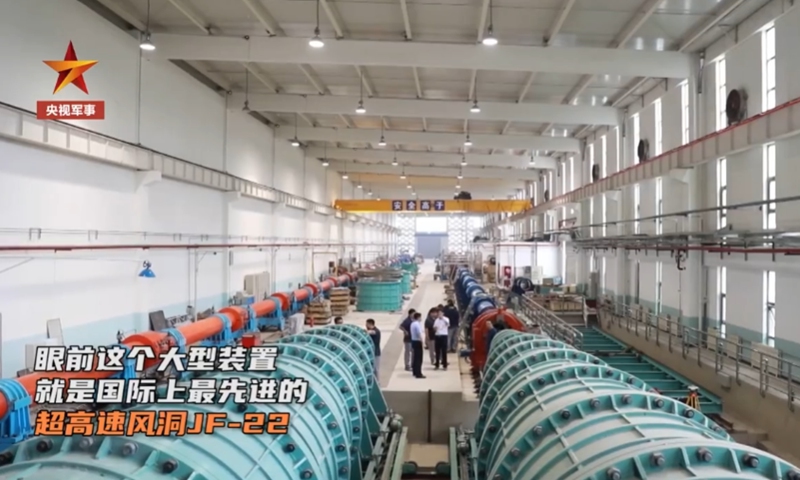 China's latest, world-leading hypervelocity wind tunnel that can simulate a speed of Mach 30 at high altitude is expected to finish construction in 2022, and will contribute to the country's hypersonic and aerospace aircraft programs. Hypersonic aircraft developed through the technology can reach anywhere in the world within one or two hours, and the technology could also help develop aerospace aircraft that reduces satellite and spacecraft launch costs by 90 percent.
Dubbed the cradle of China's next-generation aircraft, the JF-22 hypervelocity wind tunnel can simulate a top speed of 10 kilometers a second, or 30 times the speed of sound, at an altitude of from 40 to 100 kilometers, China Central Television (CCTV) reported on Monday.
The JF-22 will be the world's most advanced hypervelocity wind tunnel when it is fully built in 2022, CCTV reported, noting that it will contribute to the development of hypersonic and aerospace aircraft.
Hypersonic aircraft will be able to fly at Mach 5 to 10 and arrive at any location in the world within one or two hours, and aerospace aircraft reduce the launch cost of satellites and spacecraft by 90 percent, Jiang Zonglin, a research fellow at the Institute of Mechanics at the Chinese Academy of Sciences and the leader of the project, was quoted as saying.
According to the CCTV report, a display board at the wind tunnel site uses an illustration of the US X-51 WaveRider hypersonic flight test vehicle as a depiction of a hypersonic aircraft.
The experimental X-51 program aimed to pave the way for future hypersonic weapons, hypersonic intelligence, surveillance and reconnaissance, and future access to space, according to the website of the US Air Force.
Fu Qianshao, a Chinese aviation expert, told the Global Times on Monday that the development of hypersonic aircraft will come earlier than aerospace aircraft because they are less technologically complicated, and that early hypersonic aircraft could be disposable, when they are used for military purposes like reconnaissance and attacks.
After that, hypersonic aircraft could develop civilian uses including transport, Fu predicted.
Aerospace aircraft will be more difficult to develop, but it will be worth it, Fu said, noting that they require faster speeds and more complicated power systems, which could be a combination of turbofan, scramjet and rocket engines, in order to break the first cosmic speed.
After the successful development of the JF-12 wind tunnel in 2012 that can simulate Mach 5 to Mach 9 and has provided key support to China's major aviation and space missions, the JF-22 project started in March 2018, CCTV reported.
The JF-22 will join the JF-12 and form a world-leading aerodynamic experiment platform that can cover all hypersonic speeds, the report said.
Wind tunnels are the more accurate and efficient way to develop new aircraft when compared to other methods like computer simulations and model experiments, Fu said.
Category： Society & Population 2021 Media
Related
Focus
Most Read
Spotlight
Notice
Events
Past