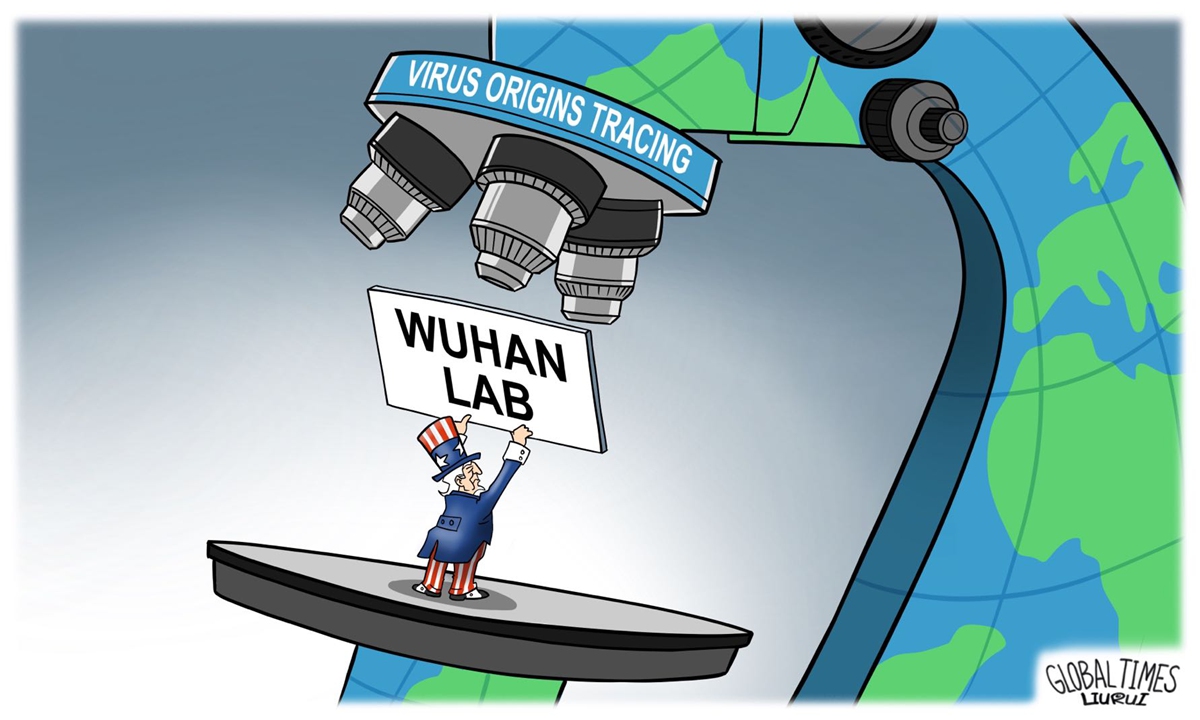 Will Uncle Sam be able to continue deceiving the world in terms of investigation into COVID-19 origins?

As the Joe Biden-set deadline of the 90-day investigation into the coronavirus origins draws near, sources told the Global Times that US intelligence agencies are gearing up their efforts to compile a report, yet are struggling to find concrete proof to support the "lab leak" theory, and even its own research institutions and allies believe the virus was almost certainly not created artificially.

Despite all those hurdles, the US, determined to use those presupposed investigation to throw mud at China, will make do with mostly circumstantial evidence that is completely unreliable in their report, said sources, who confided that Washington has been pressuring the World Health Organization (WHO) and marshaling its allies, including the EU, Australia, Japan and other countries, to launch the "second-phase origins tracing" on China as soon as possible and trying to bend the will of scientists to churn out materials to chide China.

In May, US President Joe Biden ordered US intelligence officials to "redouble" efforts to investigate the origins of COVID-19, including the theory that it came from a laboratory in China. He said the US intelligence community was split on whether it came from a lab accident or emerged from human contact with an infected animal, and he asked groups to report back to him within 90 days.

Sources told the Global Times on Tuesday that the US intelligence agencies are gearing up efforts to put together their own investigation report on the tracing of the virus origins.

Yet those US intelligence agencies cannot produce any concrete proof or scientific support to make up the "lab leak" theory, said the sources, who noted that the so-called evidence that has been fabricated so far is mostly circumstantial that is completely unreliable.

Moreover, the US research institutions and the US allies also believe that the virus was almost certainly not created artificially, and that it will be highly unlikely they will be able to draw definitive conclusions within 90 days which can verify the "lab leak" theory, according to the sources.

Speaking at a Wednesday press briefing, Zhao Lijian, spokesperson of the Ministry of Foreign Affairs, said if the media report is true, it is a testament that the US cares nothing about truth, but just how to throw mud at China.

The US' tricks to frame others using a small bottle of laundry powder fools nobody. And the more Washington tries to blame Beijing, the more people wonder if the US is trying to hide something, Zhao noted.

CNN cited sources on August 12 that the US intelligence community is still divided over two theories - one suggesting the virus originated from a lab in Wuhan, and the other suggesting it jumped naturally to humans from animals.

Officials told CNN that the Biden administration is considering whether to launch another investigation if the current one proves inconclusive.

Finding it is making little progress on the report itself, the US also resorted to pressuring other countries, the WHO and international scientists to turn them against China on the probe of coronavirus origins.

Sources told the Global Times on Wednesday that the US knows clearly that the Chinese government insists on scientific principles in the virus origins tracing issue, and opposes the politicization or disregarding the conclusions reached in the joint report on the China-WHO research, a stance that is also supported by many other governments.

China's refusal to participate in the US-led second stage of the WHO virus origins tracing work and the joint statement China made with some developing countries that was sent to the WHO have seriously impeded the US plan to promote their "virus origins investigation" that targets China.

In desperation, the US government has to win support from the international community by perpetuating lies like "China refuses to join in the virus origins investigation" and "China refuses to cooperate with the WHO." These lies, although groundless, are helpful to the US government  in smearing China and shifting responsibility of their own failure in fighting against the virus, the sources said.

The latest move by the US government is to arrange the director of the White House's Office of Science and Technology Policy and presidential science adviser to collide with governmental science advisers from the EU, Australia and Japan to issue a statement on the second phase of investigation to urge the Chinese government to reflect on its decision on the rejection, expressing disappointment on China and requiring China to "shoulder responsibility" and "take action," according to the sources.

A source close to the matter told the Global Times previously that the US' push for the probes on the virus origins was aimed at consuming China's diplomatic resources. The US is trying to find "loopholes" in China's epidemic control policy, and planning to continue pressuring the WHO and collude with its allies to pressure China in an attempt to discredit the Chinese government for "covering up the truth about the origins of the virus."

While the US is shepherding the trend of politicizing the coronavirus origins probe, a growing number of scientists stepped forward and rejected the US-led "lab leak" theory, with some scientists believing objective and scientific voices will be heard more widely which may prompt more objective reporting on COVID-19 origins in Western media.

In early July, 24 international scientists published an open letter in The Lancet reiterating the natural origins hypothesis and their firm support to health professionals and scientists of China and the world, the same views they have been holding since they published their first joint letter in February 2020 in The Lancet, when the Trump administration attempted to smear, attack and stigmatize China on COVID-19.

As many international scientists loath the US' politicization of the issue, they oppose the US' stance and refuse to support the US government.  However, the US government is going all out to threaten and entice them, including doxing these scientists and their families, censoring their papers and forcing their employers to put pressure on them, the source told the Global Times on Wednesday.

In order to bend scientists' wills and let them serve the US' interests, the US government has employed dirty plots to threaten international scientists and force them to smear China over the virus origins investigation issue.

The Global Times learned previously that prominent US scientists who have been focused on the tracing of COVID-19 origins have been facing tremendous political pressure, and some have been sidelined for not yielding to politician-driven conspiracy theories on the matter, and many have received anonymous threats.

Jonathan Stoye, head of the division of virology at Britain's Francis Crick Institute, told the Global Times previously that at this stage, accusations are particularly unhelpful, and "merely compound the difficulties in carrying out a successful investigation."

"This process [virus origins probe] must be collaborative and fully transparent. Perhaps this is a little naive, but I truly believe we must set aside any political or cultural differences in order to understand this question for the benefit of the entire population of the world," Stoye told the Global Times.