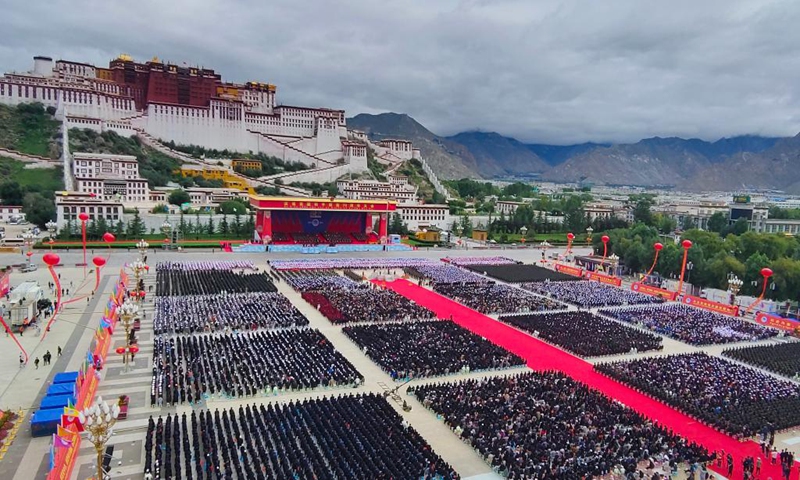 A grand gathering is held to celebrate the 70th anniversary of the peaceful liberation of Tibet at the Potala Palace square in Lhasa, southwest China's Tibet Autonomous Region, Aug. 19, 2021. More than 20,000 people from various ethnic groups attended the event held in Lhasa.Photo:Xinhua

This year marks the 70th anniversary of the peaceful liberation of China's Tibet Autonomous Region, and through travelling the border regions and several major Tibetan cities interviewing local residents, military personnel, scholars and officials, the Global Times has learned that the Communist Party of China's (CPC) successful governance in Tibet over the past 70 years means separatists and antagonistic forces have no chance of destabilizing the peace, order and development in "the roof of the world."
Development brings confidence
Tibet today has entered a stage of rapid economic development, and if there were no COVID-19 pandemic, the trend would have been even faster, according to locals in Lhasa, capital of the autonomous region. In today's Lhasa, numerous modern residential buildings, shopping malls, trendy bars, Tibetan-style night clubs, restaurants of specialties, theaters, museums, and art galleries have emerged or are under construction across the city.
The old town where landmarks like the Potala Palace and the Jokhang Temple are located remain almost unchanged, but the new town in the east and some districts in the south are showcasing aspects of the new Tibet. Many tourists who came to Lhasa and Shigatse, the second biggest city in Tibet, during summer vacation said they found the quality of life and range of entertainment here are even better than many cities in the more developed eastern regions of China.
According to data provided by the local government in January, during the period of the 13th Five-Year Plan (2016-20), the fixed-asset investment in Tibet saw an annual average increase of 11.6 percent, and the GDP has grown by more than 10 billion yuan ($1.54 billion) each year. In 2020, the GDP in Tibet soared past 190 billion yuan, which has seen a 53.7 percent growth from 2015. The GDP annual average increase was 9 percent, which is not only faster than many other regions in China, but also significantly above that of bordering countries.
A local official in Lhasa who asked for anonymity said the fast economic development could be attributed to successful governance and an emphasis on public order and security, including a crackdown on violent activities orchestrated by overseas separatists and other foreign forces.
"Our people here are now enjoying the outcomes of well-targeted and far-sighted governance. And our successful experiences have been introduced to other regions with similar characteristics and challenges, such as our good neighbor Xinjiang. So I believe our friends in Xinjiang will follow in our footsteps and realize fast development very soon," he said.
Over the past two years, Tibet's annual average GDP growth of 7.1 percent ranks among the highest of all 31 provinces, autonomous regions and municipalities in the Chinese mainland. Xinjiang, with 6.5 percent, ranks the ninth, according to data released by the local governments across the country.
Experts said the government led by the CPC is able to concentrate resources on nation building, ensuring the implementation of key projects, and making other more advanced provinces and regions to precisely assist the cities and prefectures in Tibet one-on-one or even several-on-one.
This approach ensures that Tibet has been able to receive huge amounts of investment and assistance from other parts of the country to lift up undeveloped regions and accelerate development. This can only effectively happen in a socialist country like China, and this is the source of confidence for the country to ensure the stability in the region and fight separatism, experts noted.

Sanitary workers clean the square of the Potala Palace in Lhasa, capital of southwest China's Tibet Autonomous Region, Feb. 8, 2021. Both the Spring Festival and the Tibetan New Year falls on Feb. 12 this year.Photo:Xinhua

Patriotism brings strength
Development is not only occurring in urban areas like Lhasa, but also in border regions like Yadong county, which borders Bhutan and India, and smaller villages in Ngari Prefecture bordering Nepal and India.
Phurbu Tenzin, 40, a driver in Gar county, the seat of Ngari Prefecture government, told the Global Times that the incomes of many people in his community has risen quickly in recent years, especially 2018-2019. This coincides with China's national campaign of poverty alleviation.
Phurbu's wife runs a Tibetan restaurant at the scenic spot of Kangrinboqe, the holy mountain in Ngari. He said his wife earns 600 to 700 thousand yuan every year since they opened the restaurant in 2014, and thanks to the development of the tourism industry, "sometimes the profit is about 800 thousand yuan a year," which is higher than the annual income of many white-collar workers in Beijing and Shanghai.
"Our living standard is middle-class, not very rich. I always tell my children that as long as you work hard, you can get what you want. We are living in a fortunate time. Decades ago, some unwise people want to leave here to illegally cross borders to India or somewhere else, but looking at the terrible epidemic situation in India today, those people must be full of regret," Phurbu said.
Phurbu's daughter, 17, is now studying at a high school in Beijing with an above average academic performance, and his son, 12, told the Global Times that he wants to be a soldier to serve in the People's Liberation Army (PLA) when he grows up.
The sentiment of patriotism in Tibet today is higher than the expectation of many outsiders who are unfamiliar with the facts on the ground. In many counties or villages in border areas, when China has border tensions with India from time to time, the locals will all voluntarily provide supplies because they have witnessed the remarkable change in their hometowns so they hold a strong sense of gratitude toward the CPC, and they see the PLA troops as "savers and protectors."
Local officials and villagers in Yadong county told a very little-known story to the Global Times that during the Doklam standoff in 2017, many local Tibetan villagers even refused to leave when the local government tried to evacuate them to avoid potential military conflict.
Asang, 38, born in Yadong but working in Shigatse now, told the Global Times that "I was there at the border to assist the officials to evacuate villagers, but many villagers insisted on bringing food, materials and even cows they kept to thank the PLA. It was truly touching."
A local public servant surnamed Liu echoed him and said "in fact the PLA troops have modernized logistic system and they don't need the villagers to offer them supplies, but in order to convince the villagers to evacuate, they decided to accept some supplies and pay the villagers despite the villagers' reluctance to accept a single coin. the PLA has strict principle that they can't take anything from the civilians for free."
This story reflects the sense of patriotism across Tibet. The strong ties between the military and civilians can be seen everywhere in the border regions here, and many local officials said this is a tradition since the China-India border conflict in 1962. This is the source of strength for the country to protect Tibet and fight against foreign aggression and separatism, experts said.
PLA troops stationed in border regions have been armed with cutting-edge equipment and the developed infrastructure allows them to be rapidly deployed at any location along the border.
Garma Tenzin, 26, a sergeant serving at a frontier defense infantry company stationed in Burang county, Ngari Prefecture, told the Global Times that serving in the PLA is a great honor here and all of his family members and people in the village admire him and his parents.
The company he served is known as one of the units that face the toughest environment in Chinese military, because they have to patrol on snow mountains and plateaus dealing with low levels of oxygen and extreme and ever changing weather.
Garma, who's also a CPC member, said when watching the story of other PLA officers and soldiers fighting against Indian incursions in the Galwan Valley, he and all his comrades-in-arms were impressed and he said he would learn from these heroes' courage to defend their motherland.

Threat from separatism
Rapid economic development, patriotism among the people, and the strength and courage held by the military combine to make today's Tibet unchallengeable, but the threat from separatist groups like the 14th Dalai Lama clique and other foreign forces still exist, despite no real possibility of destabilizing the region, said experts.
The so-called Tibetan "government-in-exile" has announced its "new political leader," but the new "government" will not change its only goal of seeking "Tibetan independence," observers in China have said, noting that the "election result" has shown the internal conflicts within the Dalai Lama's group, foreshadowing a dark future for the separatists.
Penpa Tsering, former speaker of the "parliament-in-exile," was announced as Sikyong, or the leader of the illegal "Central Tibetan Administration (CTA)," on May 14, according to media reports. He took over from Lobsang Sangay, who had served in the position for 10 years.
Xiao Jie, deputy director at the Institute for Contemporary Tibetan Studies within the China Tibetology Research Center, said "Penpa Tsering and Lobsang Sangay are in open conflict with each other" and Penpa Tsering is more radical and aggressive.
Chinese analysts believe that after the 14th Dalai Lama's eventual passing, the clique will turn more aggressive and may likely conduct new round of terrorist attacks against Tibet. To what extent the West will support it remains an open question, but China is well prepared and remains vigilant to threats from all outside enemies.
Zhu Weiqun, former head of the Ethnic and Religious Affairs Committee of the National Committee of the Chinese People's Political Consultative Conference, told the Global Times in a previous interview that "In the past decade, Lobsang has seen one failure after another, and this situation will be the same ahead of Penpa Tsering."
Recently, interactions between the Dalai clique, the US and India have been increasing. US Secretary of State Antony Blinken met a representative of the Dalai Lama in New Delhi in July, and Indian President Narendra Modi phoned the Dalai Lama on his birthday, according to media reports.
Experts state that unlike the Dalai clique which is racked with disunity and internal conflict, the people and the government, as well as the military in Tibet and the whole of China are unified, bonded by trust and the goal of common prosperity. The Dalai clique and other foreign forces have failed to separate Tibet from China in the past, and they won't have any chance at present or in the future.
Category： Global Governance 2021 Media
Related
Focus
Most Read
Spotlight
Notice
Events
Past