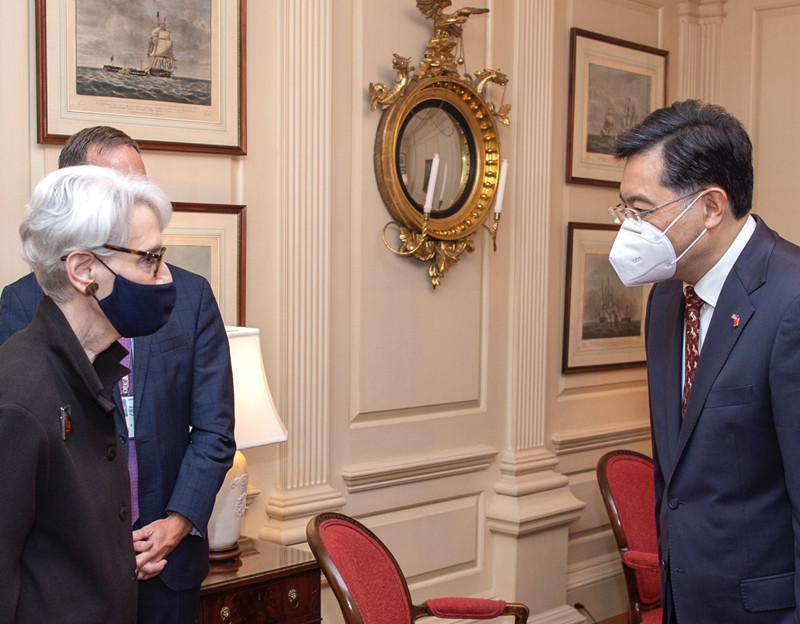 Chinese Ambassador to the US Qin Gang on Thursday met with US Deputy Secretary of State Wendy R. Sherman in Washington, amid the most eased of atmospheres for an official meeting in the past couple of years, especially compared with the bilateral talks in Alaska and Tianjin, highlighting the importance of managing differences.
It was the first senior diplomatic meeting between China and the US since Qin was appointed as ambassador in July, showing that both sides are working to manage their differences. However, some experts believe that the meeting is more about courtesy, and people should not be overly optimistic about it.
According to the Chinese Foreign Ministry's release, Qin pointed out that the China-US relationship is at a new crossroads.
"Both sides agreed that China-US relations are very important and it is necessary for the two sides to manage differences and disagreements, and improve bilateral relations," said the 55-year-old ambassador.
Qin said in his latest Twitter post after the dialogue that he looks forward to "continuing dialogue and communication with American colleagues for a rational, stable, manageable & constructive China-US relationship."
Sherman said the Department of State will provide convenience and support for the Ambassador's performance of duties in the US.
"Both sides noted the importance of managing differences… the communication demonstrates the willingness of the two countries to manage differences and ensure that their relationship moves forward in the interests of both sides," Li Haidong, a professor at the Institute of International Relations at China Foreign Affairs University, told the Global Times on Friday.
Although the Chinese Foreign Ministry's media release did not mention the Taiwan question, the Xinhua News Agency reported that Qin stated China's position on the issue during the meeting, emphasizing that the Taiwan question is the most important and sensitive issue in China-US relations, following turbulence created by Lithuania.
Analysts said that there are many conflicting words and deeds in the US' China policy, and the two countries have clashed over many issues, including the Taiwan question and human rights.
"The high-level leadership in China-US relations is more important than ever… It is also even more urgent and important than ever to actively manage bilateral relationships," Li said.
Ambassador Qin arrived in the US about two weeks ago after former Chinese ambassador Cui Tiankai left Washington in June. When delivering a speech to Chinese and American media upon his arrival at his new post on July 28, he vowed to bring bilateral relations back on the right track, and make the China-US relations one of mutual respect, equal treatment, win-win cooperation and peaceful coexistence.
Prior to Sherman, Qin had not met with any senior US officials as Chinese ambassador. Some experts who hold a more realistic idea said the eased atmosphere of the meeting can be interpreted as an act of "courtesy," but there is still little chance that Beijing and Washington will back down on their respective matters of principle.
"This meeting is not for negotiation... It was arranged since Ambassador Qin took office, and it is customary for the US to arrange foreign affairs officials meetings with new ambassadors," Yuan Zheng, deputy director of the Institute of American Studies at the Chinese Academy of Social Sciences, told the Global Times on Friday.
According to a release from the US Department of State, Sherman reviewed issues from her meetings with Chinese officials in Tianjin last month and expressed the US' commitment to continuing discussions.
Both the US and China's post-meeting releases were very limited, and no matter whether the representatives from both sides were moderate or tough, neither would retreat on important issues against the backdrop of the strategic game, Yuan said.
Sherman met with Chinese State Councilor and Foreign Minister Wang Yi and Vice Foreign Minister Xie Feng in North China's Tianjin in July, during which the two sides exchanged views on various issues, along with US accusations against China and China's demands to the US.
Wang Yi clarified three bottom lines that China upholds and the US should not challenge to prevent China-US relations from moving out of control during his meeting with Sherman in Tianjin.
As China-US relations currently face severe difficulties and challenges, the direction the two countries would go next, either toward confrontation or improved development, depends on the reflection and choice by the US, Wang said.
The two countries were already clear about each other's positions, but it's better to restate their positions in Washington than to say nothing, said Yuan.
Category： Global Governance 2021 Media
Related
Focus
Most Read
Spotlight
Notice
Events
Past