The list, which will take effect on August 26, outlined 70 special management measures in 11 categories for overseas services providers, according to a statement on the website of MOFCOM. For those industries not put on the list, domestic and overseas services providers shall have a level playing field and enjoy equal market access in Hainan, which will ensure greater openness, transparency and predictability.


Specifically, the list eases restrictions in the areas of commercial services such as legal services and market research, boosting Hainan's appeal for investment. The new list also lifts limits on more than 10 vocational exams for overseas citizens in a bid to push for greater financial opening and free flow of talent.


The negative list for cross-border services trade in Hainan is the first such list unveiled at the national level. It clarifies special management measures for cross-border delivery and consumption, Yuan Yuan, deputy director of the department of pilot free trade zones and free trade ports at the MOFCOM, told reporters on Monday.

The first list of categories that are off-limits to foreign investment was released in 2013 for the China (Shanghai) Pilot Free Trade Zone, and the list was later extended for use nationwide. When it comes to cross-border services trade, China's accession to the WTO and all the free trade deals the country has signed all adopted a positive list, prior to the Monday announcement.


"Such a higher-level opening-up is not required by any bilateral agreements; instead, we take the initiative to do so. This goes beyond China's commitments for WTO accession and its main free trade agreements (FTAs) in corresponding areas," Wang said.


The openness of the Hainan negative list in over 120 services sectors outsmarts the commitments China pledged at its WTO accession, according to Yuan. 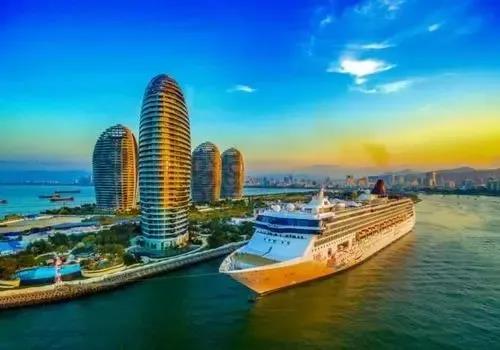 Experts said that the higher-level institutional opening-up measure will have far-reaching implications for promoting the quality of the Hainan Free Trade Port, conducting stress tests for wider opening-up in the country as well as building an open economy at a higher level.


"The announcement of the negative list indicates that Hainan - the world's largest free trade port - will strive for higher-level opening-up in growing service sectors so as to maintain fair competition, protect the legitimate rights and interests of foreign investors, and build an international business environment governed by the law and to attract more foreign investments," said Liang Haiming, dean of Hainan University's Belt and Road Research Institute.


Official data showed that the actual use of foreign investment in Hainan reached $950 million in the first half of the year, surging 623.6 percent year-on-year, far outpacing the country's overall year-over-year growth rate of 28.7 percent.


Tang Wenhong, director of the MOFCOM's department of pilot free trade zones and free trade ports, said that the authorities will evaluate the implementation of the Hainan negative services list, and then formulate a negative list for trade in services that applies to free trade pilot zones across the country.