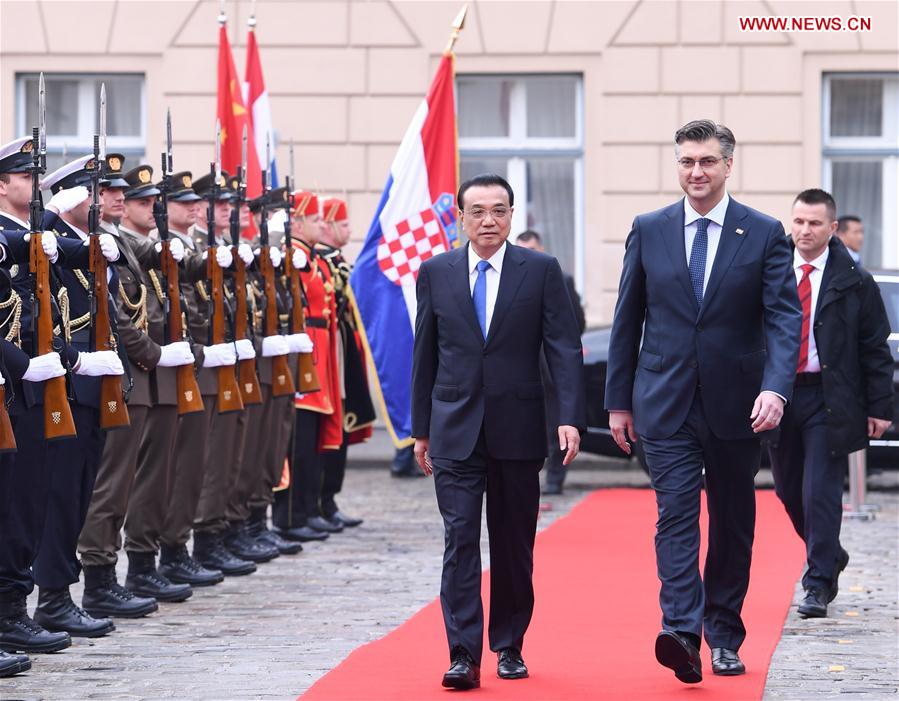 China is ready to enhance the synergy of the Belt and Road Initiative (BRI) with Croatia's development strategies, Chinese Premier Li Keqiang said on Wednesday.

Li made the remarks when holding talks with Croatian Prime Minister Andrej Plenkovic in the Croatian capital of Zagreb.

Hailing the long-term friendship between the two countries, Li said China and Croatia have enjoyed a healthy and sound development of bilateral relations since the establishment of diplomatic ties.

He said China stands ready to work with Croatia to strengthen mutually beneficial and win-win cooperation and carry on friendship on the basis of mutual respect, equity and mutual trust, so as to explore new dimensions for bilateral relations and push forward bilateral cooperation to a new level.

On practical cooperation, Li said China is ready to expand the scale of two-way trade, boost the level of two-way investment, and increase the import of Croatian specialty products that suit the demands of the Chinese market, and deepen people-to-people exchanges including culture and tourism.

"China will support its companies to participate in the construction of Croatian ports and railways in line with market principles," Li said.

The Chinese premier is scheduled to inspect the Peljesac Bridge project with his Croatian counterpart on Thursday. The bridge, which used European Union (EU) standards and funds, is contracted by a Chinese company through bidding.

"The Peljesac Bridge project is a model of tripartite cooperation among China, Croatia and the EU, and realizes mutual benefits and win-win results," Li said.

Li stressed that the 16+1 cooperation mechanism has played an important role in enhancing cooperation between China and 16 Central and Eastern European Countries (CEEC) and cementing the European integration process.

This is the first time ever by a Chinese premier to visit Croatia since the establishment of diplomatic ties.

Plenkovic welcomed Li on the visit and said Croatia stands ready to strengthen the understanding of China's history and culture, share China's development opportunities, support the building of the Belt and Road so as to benefit the two countries and peoples.

Noting the high-level development of bilateral relations, Plenkovic said Croatia and China will ink a series of cooperation documents during Premier Li's visit, which demonstrates the latest achievements of practical cooperation between the two sides.

"The Peljesac Bridge is highly rated by the Croatian people and China is Croatia's important partner on infrastructure construction," said the Croatian prime minister, adding that Croatia is willing to further enhance cooperation with China in politics, economy, culture, tourism and port infrastructure.

Saying he is looking forward to co-chairing the eighth leaders' meeting of China-CEEC, Plenkovic also commended positively the outcomes of the 21st China-EU leaders' meeting and said as an EU member, Croatia stands ready to play an active and constructive role in cementing the development of EU-China ties.

After the meeting, Li and Plenkovic witnessed the signing of multiple bilateral cooperation documents in areas including trade and investment, tourism, quality inspection and sports. The two sides also released a joint communique between the two governments.

Prior to the meeting, Plenkovic held a grand welcome ceremony at the St. Mark's Square for Li.