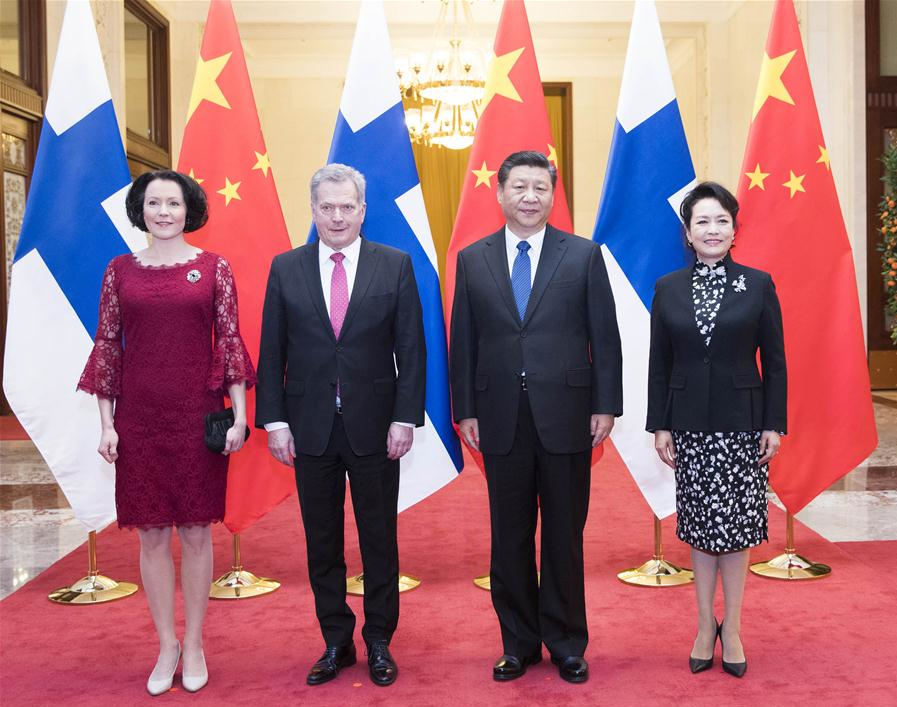 Chinese President Xi Jinping (2nd R) and his wife Peng Liyuan (1st R) pose for a group photo with Finnish President Sauli Niinisto (2nd L) and his wife Jenni Haukio in Beijing, capital of China, Jan. 14, 2019. Xi held talks with Niinisto at the Great Hall of the People in Beijing on Monday. Before their talks, Xi held a welcome ceremony for Niinisto. (Xinhua/Ju Peng)

BEIJING, Jan. 14 (Xinhua) -- Chinese President Xi Jinping and his visiting Finnish counterpart Sauli Niinisto agreed to work together to write a new chapter in bilateral ties during their talks on Monday.

The two countries need to adhere to mutual respect and trust, be open-minded and inclusive, respect each other's development path and take each other's core interests into consideration so as to promote the steady development of bilateral ties, Xi told Niinisto during the talks held at the Great Hall of the People.

Xi encouraged both countries to expand cooperation in new areas driven by innovation.

China appreciated Finland's support to the Belt and Road Initiative, said Xi, adding that the country is ready to work with Finland to enhance Belt and Road cooperation.

He suggested the two countries make the best use of the China Railway Express and other facilities to boost two-way trade, conduct third-party cooperation, discuss opportunities for cooperation on the Arctic shipping routes and jointly build the Polar Silk Road.

Xi also called for enhanced cultural and people-to-people exchanges as the two presidents would jointly launch the 2019 China-Finland Year of Winter Sports in the hope of forging a model of winter sports cooperation.

Stressing that China has always supported the European integration, Xi said China hopes Europe will maintain unity, stability, openness and prosperity and play an active and constructive role in the international arena, calling on Finland to continue contributing to China-Europe ties.

On the Arctic affairs, Xi said China stands ready to work with Finland to enhance cooperation under the framework of the Arctic Council and boost the sustainable development in the Arctic region.

The Belt and Road Initiative proposed by Xi is very important, he said, adding that Finland is willing to play a positive role to better align this initiative with the European Union (EU) to promote the connectivity of the Eurasian continent.

During Niinisto's visit to China, the two sides are scheduled to publish a joint action plan (2019-2023) on promoting the future-oriented new-type cooperative partnership between China and Finland.

It is important for the two countries to maintain close communication and coordination on international affairs under the current situation, he said, adding that Finland applauds China's positive role in tackling climate change and safeguarding the multilateral trading system.

Finland will assume the rotating presidency of the EU in the second half of this year. The country will take this as an opportunity to promote closer ties between the EU and China, Niinisto said.

After the talks, the two presidents witnessed the signing of cooperation agreements and attended the inaugural ceremony of the 2019 China-Finland Year of Winter Sports.

There is huge potential for cooperation on winter sports between the two countries given the high complementarity, Xi said while addressing the inaugural ceremony.

Finland supports China in hosting the 2022 Beijing Winter Olympic Games, Niinisto said, adding that he is glad Finland will be the first country to launch the Year of Winter Sports with China and he believes this will further promote friendship between the two countries.

China is on its way of becoming a big power in winter sports and Finland is willing to lend a helping hand, Niinisto said.

Niinisto is paying a state visit to China from Sunday to Wednesday at the invitation of Xi.